A document summarizing the main goals of the project can be downloaded here.

When a person has multiple diseases, this is called comorbidity or multimorbidity. This is often the case for insulin-related somatic diseases, in particular type 2 diabetes, metabolic syndrome, obesity and Romano-Ward Syndrome (a genetic heart condition). Patients with these diseases frequently have comorbid brain disorders such as Alzheimer’s disease, obsessive-compulsive disorder (OCD) or autism spectrum disorders (ASDs). And vice versa, people who have these brain diseases often experience problems with the body’s insulin signaling system. This means that insulin-related signaling mechanisms may play a role in the multimorbidity of somatic and brain diseases. Understanding these mechanisms will improve the diagnosis and treatment of these conditions, and this is what the PRIME project is investigating.

The role of insulin in brain diseases

How can insulin mechanisms play a role in both somatic and brain diseases? In our body, insulin mainly stimulates sugar uptake after eating a meal. While in our brain, insulin plays an additional, important role in the survival of brain cells and regulating brain function. We know that insulin signaling in our body interacts with insulin signaling in our brain. For example, disturbances in insulin signaling can trigger immune reactions that in turn influence changes in blood vessels of the brain. Insulin can also more directly influence brain processes, for instance, those involved in memory and mental flexibility.

Medication for type 2 diabetes is currently being tested as a potential new treatment for Alzheimer’s disease. The first results seem to indicate that this medication may indeed reduce Alzheimer’s symptoms [1]. Other research has shown that there is a genetic overlap between insulin signaling, OCD [2] and ASDs [3].

Insulin signaling in the brain is composed of several components, but one key molecule is of particular interest to the PRIME consortium: KCNQ1. KCNQ1 is a voltage-gated potassium channel that plays a role in stopping neurons from secreting insulin. We focus on this molecule because a genetic link between KCNQ1 and OCD, type 2 diabetes and Alzheimer’s disease has previously been found [4][5]. It is, therefore, an interesting candidate to better understand the multimorbidity between these diseases.

Furthermore, Romano-Ward Syndrome (RWS) is a rare disorder caused by defects in the KCNQ1 gene. RWS patients often have insulin resistance, which is a hallmark of type 2 diabetes. In PRIME, we will also study the behavioural and cognitive characteristics of these patients to further understand the role of KCNQ1 in insulin-related multimorbidity.

We will also use animal models to study the role of KCNQ1 in insulin signaling and its effect on the brain. Our own initial studies have shown that both mice with type 2 diabetes and ‘normal’ mice displayed very compulsive behaviour when their KCNQ1 gene was disrupted. 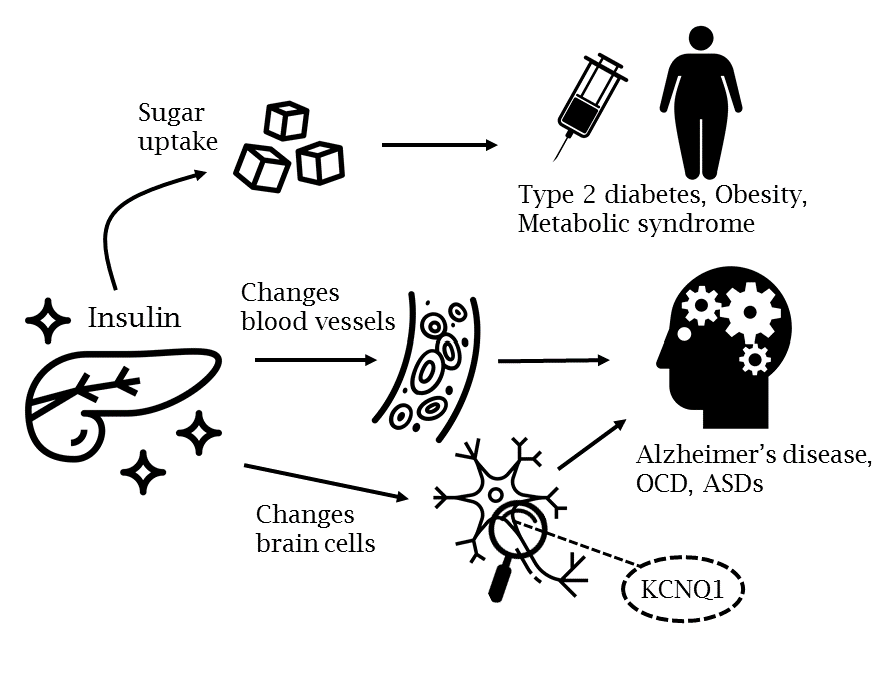 Figure: Summary of the role of insulin mechanisms in somatic and brain diseases Schematic overview of the role of insulin signaling in somatic and brain diseases. When insulin signaling is deficient, this negatively influences sugar uptake and ultimately leads to type 2 diabetes, obesity and/or metabolic syndrome. At the same time, disturbances in insulin signaling can also influence (brain) blood vessels and brain cells. These changes have a negative effect on cognitive functions which can result in Alzheimer’s disease, OCD and/or ASDs. The molecule KCNQ1 is thought to play a pivotal role in the comorbidity between insulin-related somatic and brain diseases. Images from www.thenounproject.com: “Prancreas” icon by Becris, “Sugar” icon by RROOK, “Blood” icon by Peter K., “Insulin” icon by leo-graph.com, “Obesity” icon by corpus delicti, “Neuron” icon by Laymik, “Magnifying Glass” icon by Nesi Ratna Nilasari.